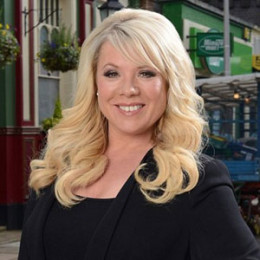 Letitia Dean is a British actress who came to limelight from the British soap opera EastEnders. She has played over eight TV drama shows in her life time. Apart from TV series, she has also played in movie England, My England in the year 1995.

Born on 14th November 1967, Letitia Dean is a daughter of Leslie, a tailor and Ellie Dean, English romantic novelist. She grew up along with two brothers: Stephen and Martin.

When she was at the age of three, the whole family moved to North Buckinghamshire village of Stoke Goldington. There she attended a local dance school and used to perform along with older brother Stephen.

From childhood, Letitia was interested in dancing, singing, and acting. At the age of 12, she was cast in the hit stage musical, Annie, at London’s Victoria Palace Theatre. Later, she played the lead role, Sandy, in the stage musical Grease.

In 1983 she was cast in the British television children’s drama series Grange Hill. Her performance as Sharon Watts in the BBC soap opera EastEnders won her nomination for different awards including British Soap Awards.

In the year 1995, she made Hollywood debut in the movie England, My England directed by Tony Palmer. The movie starred Simon Callow, Michael Ball, Rebecca Front, Lucy Speed, Letitia Dean, Nina Young and so on.

Moreover, she last appeared on the TV series Lucy Sullivan Is Getting Married.

The talented actress married her boyfriend Jason Pethers after few months of dating on 30th September 2002 at All Saints’ Church in Marylebone. In the wedding ceremony, her close friend, and EastEnders co-star, Susan Tully, was a bridesmaid.

After five years of marital relationship, the husband and wife divorced in 2007. She then dated Bowen Perrin in the December 2007. But this relationship did not last long. Currently, she is single.

Letitia’s source of income includes acting and singing. She has successfully collected an estimated net worth of $5 million.

Letitia Dean married Jason Pethers, after dating few months at All Saints' Church, Marylebone. Letitia's close friend and EastEnders co-star, Susan Tully was a bridesmaid at the wedding. Many of the castmates from EastEnders were also present in the wedding ceremony. Unfortunately, it was announced that the husband-wife separated in 2007.