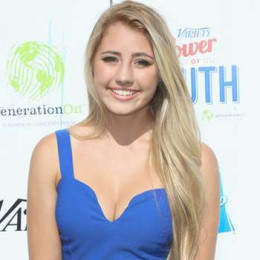 Lia Marie Johnson is an American singer, actress as well as an internet personality. She was born in a military family. She is the eldest child in her family. She is notable for appearing in many different web series created by Fine Brothers. She has her own channel in YouTube named Lia Marie Johnson, which got 13 million views in 2013. She also knows to play guitar.

Currently she is in relationship. The guy she is dating is also YouTuber. According to some sources the couple is dating since 2014. It’s been 22 months of their relationship and hope that it lasts longer. Other than that there is no nay rumor or confirmation about her relationship with anyone. She is very hardworking as well as popular; in this pace she is going to be extremely successful in her career in future. She has also been referred as one of the biggest young star in YouTube.