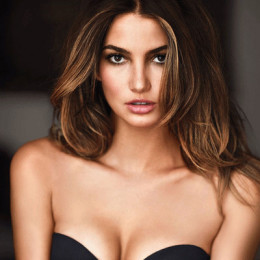 Lily Maud Aldridge is an American model. She is Victoria’s Secret Angel and also a Sports Illustrated Swimsuit Issue model. Her father Alan Aldridge is an English artist and her mother Laura Lyons is a model. She is from the family having relations and interest in fashion world. She had begun her career in modeling when she was only sixteen years old for Abercrombie and Fitch

At the age of 17, she got chance to appear on the cover of the August 2003 Spanish magazine named Vogue. She had also appeared in editorials for Cosmopolitan, Glamour, Elle Girl and Teen Vogue. In 2009 she walked in her first Victoria’s Secret Fashion Show. For 9 long years, she had also been faced with Velvet Teen. In spring 2011 she was featured in an advertising campaign for clothing company Aag & bone.

As of 2019, she has an estimated net worth of $8 million, as per celebrity net worth.

Lily Aldridge was born Lily Maud Aldridge on 15th November, 1985, in Santa Monica, California, United States to Alan Aldridge and Laura Lyons. Her father is an English artist and her mother is Play Boy Playmate.

Her entire family is fashion oriented, and also she experienced her childhood in a fashion-centric family. Aldridge’s birth sign is Scorpio.

She has been married to her long time boyfriend. After having five years of long time relationship with him the couple got married. He is a lead singer and guitarist.

She has a daughter from her husband. Her daughter's name is Dixie Pearl Followill.