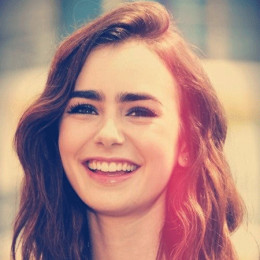 Lily Jane Collins is a professional model and actress, best known for playing in films like Mirror Mirror, Abduction and The Blind Side. She was born to Phil Collins, a musician and Jill Tavelman, former president of the Beverly Hills Women's Club. She is British Citizen with English Ethnicity. She is a graduate of Harvard-Westlake School and has majored in broadcast journalism form the University of Southern California. She has won 2008 Young Hollywood Award for One to Watch.

As of 2019, Lily Collins is possibly single, and previously, she dated several guys. She had an affair with co-star Jamie Campbell Bower in 2012 and the couple split in 2013.

Then, she dated Chris Evans briefly before rekindling her relationship with Bower from 2015 until 2018.

Lily Jane Collins was born on March 18, 1989, in Guildford, Surrey, England to Phil Collins, and Jill Tavelman. Her father is an English musician and her mother is the ex-president of Beverly Hills Women's Club. This was her father’s second marriage.