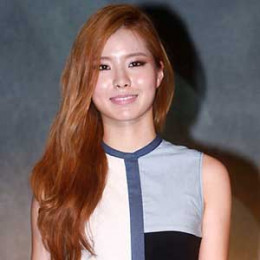 Lim Kim is a South Korean singer, actress, and a member of the band Togeworl with Do Dae-Yoon, who is her high school fellow. She competed in the Superstar K3 singing competition as a member of Togeworl, placing third. Kim has also appeared in the Korean drama Shut Up Flower Boys Band and song for the soundtrack of the film. She also earned fame from her solo single "All Right, " and hit solo album Goodbye 20.

Kim Ye Rim famously known as Lim Kim, a South Korean singer and a member of Togeworl band, was born on January 21, 1994, in South Korea, where she was raised by her parents.

Later, She decided to go aboard for study and attended Leonia High School in New Jersey. U.S.A. In 2012, while in high school, she gave audition for the South Korean singing competition, Superstar K3 in New York City.

She gave audition with her high school Korean friend Do Dae- Yoon. They formed a band together name Togeworl. They passed the audition and went to Seoul for the competition, where they were picked to be guided by the singer- songwriter Yoon Jung-Shin, and they won the third position in the contest.

After that Kim and her band partner, Dae-Yoon stayed in South Korea, where they continued to learn music and soon signed a contract with Mystic89.

In 2012, Togeworl released their first song for the soundtrack of the TVN variety shows The Romantic. In March 2012, Kim started attending high school in Bundang-gu, Seoul. Kim also appeared in the Korean drama Shut Up Flower Boys Band in March 2012 and sang two songs for the soundtrack “Two Months” and “ Love U Like U,” which was a duet with L, the member of the Infinite boyband.

As a duo, Togeworl planned to debut in 2013, but her partner returned to the United States, because of some issues with her school. So, Kim decided to debut as a solo artist.

Kim released the album A Voice, which included the song “All Right” in June 2013, which was a success. It reached number two on Gaon’s singles chart.

Then she released two albums back to back in September, Her Voice, and in November, Goodbye. In April 2015, she released another album Simple Mind. The album's track “Awoo” was included on SPIN’S 101 Best Songs of 2015 and also ranked number 8 in the Billboard’s 20 Best K-Pop Songs of 2015.

The famous K-Pop singer and actress Lim Kim seems to be a private person. She hasn’t revealed her relationship and personal life yet. It looks like she wants to keep her dating and relationship away from the cameras.

When appearing as a guest on a KBS’s radio program ‘T’  Jung Chi and Jang Dong Min’s 2 o’clock, she mentioned that she likes babies and want to have three but will get married when she is around 30.

Till now there are no rumours about her dating. We can assume that she is single till date and focused on her musical career.

The well-known K-Pop artist Lim Kim net worth is under review but she seems to be making a decent amount of salary from her singing and acting career.