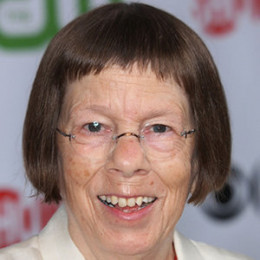 An American film, stage, and television actress, Linda Hunt is known for her role as Henrietta Lange in the CBS series NCIS: Los Angeles. She is one of the two daughters of Raymond Davy Hunter, vice president of Harper Fuel Oil on Long Island, and Elsie Doying Hunter, a piano teacher. Hunt's film debut in 1980 was in Robert Altman's musical comedy Popeye and won the Academy Award for Best Supporting Actress in 1983, becoming the first person to win an Oscar for playing a character of the opposite sex.

Linda hunt is in marital relationship with Karen Klein since 2008. Her work life and achievements get a lot of writings and appreciation, however, her private life has remained mostly low profiled. So there is more details about her husband available. Behinds it is known that she has been happily married and couple is living together in Los Angeles. They love each other a lot and are of caring and respectful nature.

Since 1987 Hunt has lived in Los Angeles with her husband Karen Klein, whom she married in 2008. No details are available about their children.