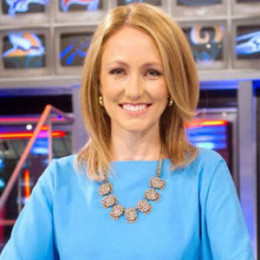 Lindsay Rhodes is one of the well recognized American sportscaster, journalist plus TV personality. She is currently the employee at NFL Network working as a host and a reporter. Lindsey is a married to Matt Rhodes.

Lindsay Rhodes was born on 31 December 1976 as Lindsey Soto. She is a native of EI Toro, California, USA. She is the youngest daughter of insurance company agent and a homemaker.

Lindsey completed her high school education from El Toro High School and then enrolled at the University of Southern California. She took broadcast journalism as her major subject. Rhodes also became sports editor while in high school.

The 41-year-old Rhodes began her career as an intern at USC Athletic Department and at Fox Sports Net. She started her professional career being an employee of ABC network in Yakima, Washington reporting for weekend sports and weekday news in 1998.

Later she joined KKFX, as a weekday sports anchor for a Fox affiliate in Santa Barbara, California. 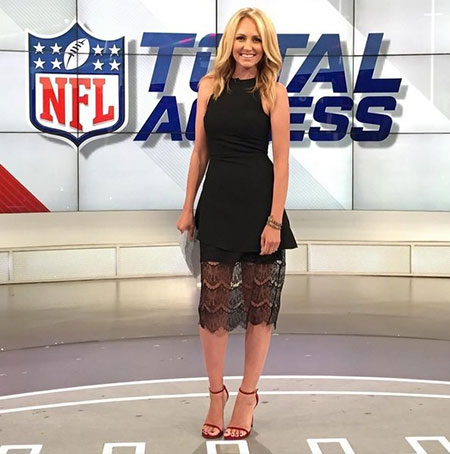 In January 2003 she worked as a full-timer at FSN West and FSN Prime Ticket. There she worked as a sideline reporter for USC/UCLA football, Los Angeles Sparks telecast, and Los Angeles Avengers. While working there, she was recognized as one of the most visible reporters and anchors.

She covered the 2005 game in which Avengers defensive tackle Al Lucas died after suffering a spinal injury. Her work, Southern California Sports Report in 2000 and Insight Bowl in 2008 got her wide fame in the journalism field.

Lindsey moved to NFL Network in 2008. She served as an anchor on NFL Total Access, reporting for NFL Network Now. She also served as the in-studio reporter for NFL GameDay Morning.  She has also been a two-time Emmy-Award winner.

The beautiful blonde Lindsey married her longtime boyfriend Matt Rhodes in 2012. She changed her surname to Rhodes after her husband. The duo is blessed with two children together.

Since she prefers some privacy, she has not disclosed any information about her children yet. However, she is seen posting the photos of her family on the several social sites. She is living a blissful and a contended married life along with her husband and daughter.

Lindsay is one of the successful journalists who earn a decent amount from her career. She has also won the prestigious Emmy Award which certainly boosted her salary. However, there is no factual information about her net worth till date.

Lainsay Rhodes married her longtime boyfriend Matt Rhodes in 2012. The duo is still happy together with no controversies between them.