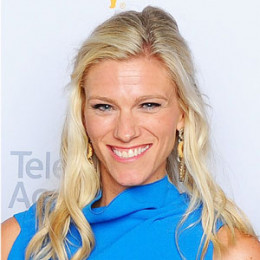 Lindsay Shookus is the winner of the Emmy Award for producing the TV show The Saturday Night Live and was nominated several times. She was also titled as one of the Billboard's 50 Most Powerful Music Executives in 2015 and 2016,

She attended Williamsville South High School and later studied journalism at the University of North Carolina at Chapel Hill from 1998 to 2002.

Shortly, after her graduation, in 2002, Shookus worked as a producer's assistant on Saturday Night Live. In, 2008, she was promoted to assistant producer on the show and also got producing credits for 45 episodes of 30 Rock from 2008 to 2010.

She was titled as an SNL co-producer in 2010 and later credited as a producer from 2012. The Emmy Award winner Lindsay was also head of the show's talent department working as booking host and musical guest and also a cast member.

In 2015 and 2016,  she was named one of the Billboard's 50 Most Powerful Music Executives. In 2015, Lindsay also won Emmy Awards as a producer of Saturday Night Live. Till now she has gained seven nominations for Emmy. In 2016, she was one of the 200 women, who were invited to Marie Claire's first ever Power Trip conference.

The 37-year-old, Lindsay Shookus was married to Kevin Miller, who is a screenwriter. They first met in 2002 and began dating. After, eight years of dating they became husband and wife on 2010 at the Country Club of Buffalo in Williamsville, N.Y. They have a daughter together, born on early 2013. Later, the couple divorced in 2014. The reason behind their divorce is Shookus' affairs with Ben Affleck.

Currently, the 37 years old, Lindsay is dating Ben Affleck, who is an American actor and filmmaker. The alleged boyfriend and girlfriend were seen many of times together. Affleck was previously married to Jennifer Garner.

The gorgeous Lindsay Shookus' net worth is not revealed yet. She produces the famous American TV show The Saturday Night Live, from which she must probably earn a decent salary.

Lindsay Shookus was previously married to Kevin Miller. Later, they divorced. They have a daughter together.

Lindsay Shookus has a daughter from her previous marriage with Kevin Miller.