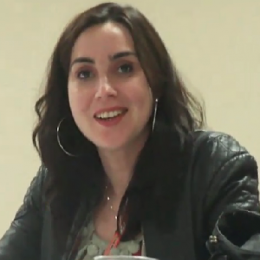 Lisa Ortiz is well-known as a voice actress. Despite lending her voice in anime, she is also involved in directing and producing too. She gained popularity through her role as Lina Inverse in Salyers and Amy Rose in Sonic the Hedgehog. She has appeared in dozens of anime, series, video games. She has voiced many popular characters of Pokemon. She is also a director of the Pokemon anime and TOM Wayland.

Liza Ortiz, the well-known voice actress, was born on December 11, 1974, in New York, USA. She belongs to white ethnicity.

She completed her education at Hofstra University and received a degree in theater.

Ortiz journey of voice acting is quite different than other voice actors. She got into voice acting when her brothers stolen her car which led her to meeting a friend to retrieve her car. That friend invited her to attend the audition of voice acting and landed the role of Deedlit in Record of Lodoss War.

Lisa has lent her voice in many popular series and anime. Her best-known role was Serenity Wheeler in Yu-Gi-Oh!. While she speaks both the language Spanish and English, she helps in creating the dialect voices.

She is one of the original voice actresses on Pokemon as she provide the voices for the series until the end of the eight season when Pokemon USA and TAJ Productions took over the dubbing and distribution of the series.

Lisa is the President of an audio post house named Noise of O Productions, LLC and has directed various games and animation, including Modern Combat 5 and Super 4 Playmobile.

The 43 years old, voice actress is very secretive regarding her personal life, she never spills a bean about her private stuff. It seems like she is possibly single and not dating anyone.

Ortiz has never come to the highlights for her affairs and relationship. However, some people have speculated her being a married woman but either it is true or just a hoax is still a mystery.

Considering her amazing career, she might have an impressive net worth. However, the exact figure hasn't been revealed yet.