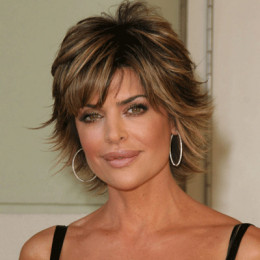 She is an American television actress and a host, known best for her role in the series our Lives, Melrose place and as the host in SoapNet's Soap Talk. She was born to parents, father Lois and mother Frank Rinna. She has Portuguese descent. She went to Hoover Elementary, Hedrick Junior High School, Medford Mid-High School and Medford Senior High School where she was a cheerleader as well. She has been active in the industry since 1985 till present.

She is a married woman and mother of two children. She has been married to her husband for nearly two decades and is living very happily together.She loves to spend her time with her husband and children. Prior to her marriage, she had affair with two men and there is no record of her other affairs if any. She was rumored to have plastic surgery is done which she acknowledged being true. There are no any current rumors available on her.

Lisa Rinna was born Lisa Deanna Rinna on July 11, 1963, in  Newport Beach, California to Lois and Frank Rinna. She is American and belongs to the Italian, Portuguese, and English descent.

Rinna along with her family shifted to  Medford, Oregon because of her father job-related reasons, and she spent the most of her childhood there. In 1981, she completed her graduation from Medford Senior High School. Later, she moved to San Francisco in order to pursue her career as a model.

Rinna started her career as a model as she has appeared in the 1985 John Parr "Naughty Naughty" music video as the passenger in Parr's car. In 1990, she began her acting career through The Hogan Family but she gained public recognization in 1992 when she was signed in the NBC's Days of Our Lives as Billie Reed.

In 1998, Rinna posed nude for Playboy Magazine when she was six months pregnant. In 2009 she again posed for Playboy.

She has worked on numerous TV series and movies including,  Another Woman's Husband, Good Advice, Melrose Place, Big Time Rush and many more.

Apart from acting, she runs a talked show,  Soap Talk which was aired on SOAPnet for which she succeeds to earned Emmy's nomination. In 2007, she hired as the host of TV Guide Network's red carpet coverage.

Rinna also participates in the 2nd season of Dancing with the stars where she was eliminated in Round Seven based on audience voting. She has seen in the  Season 4 of Celebrity Apprentice,  Late Night with Jimmy Fallon, The Real Housewives of Beverly Hills, Sing Your Face Off.

Rinna along with her husband, Harry Hamlin starts the business of the Belle Gray clothing boutique in Sherman Oaks, California but due to their busy schedule and acting career they closed the store in 2012.

After dating couple of years, they decided to get married. They have two children together and are living happily together.

She is grown up and goes to school. She is beautiful and adorable. Her parents love her very much.

She is the youngest member in her family. She is loved by all. She is grown in her early teens and attends school with her sister.