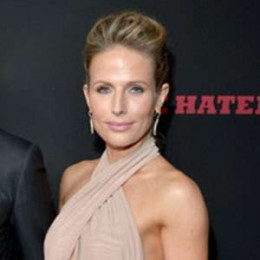 Lisset is a Mexican actress and singer. She is well known for Catalina Y Sebastian(1999), Lo Que la Vida me Robo(2013). The talented Lisset has also successfully established herself in the singing world.

She made her acting debut as Jessica on the series Catalina Y Sebastian in 1999. Lisset has made appearances on the big screen in the movies like 2001's Huapango and 2010's Heroes Verdaderos.

In 2005, she portrayed the role of Diana in Montecristo. She appeared in the television show like “Lo Que la Vida me robo" in a villainous role.

The beautiful actress Lisset has been married twice. Her first husband was Demian Bichir, a Mexican actor. They tied the knot in 2001 and divorce in 2003.

Her second husband was Liasrdo Guarino, a singer, and actor from Spain. They exchanged vows in 2007. They are parents to a child named Maria Guitierrez. After seven years of marital relationship, the couple divorced in 2014.

Currently, she no boyfriend and is enjoying her single life with her child.

The beautiful and talented singer and actor earns a good amount of money from her career. Lisset has accumulated an estimated net worth of $100,000.

Later, Lisset Gutierrez married Lisardo Guarinos, an actor, and singer. Lisardo is better known for his role in the movie Casi divas, Héroes Verdaderos, and Aqui Entre Nos. They are parents to a baby girl María Guitiérrez Guarinos.They divorced in 2014.

Lisset first child was born when she was married to Lisardo Guarinos. Their daughter's name is María Guitiérrez Guarinos.