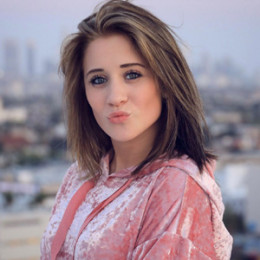 Elizabeth Wurst, better known as Lizzy Wurst is an American Instagrammer and YouTube star. She gained popularity on Vine before the app was shut down. Wrust has over million Instagram followers and YouTube subscribers till date. Her current boyfriend is Lance Stewart: both have made many YouTube videos together.

Lizzy Wurst was born on 22nd July 1998 to American parents in the United States of America. She grew up along with her younger brother who appeared on many of his Vine videos.

From early days, she wanted to become an internet celebrity, and at the age of 18, she becomes the part of Vine.

Wurst’s began her career from Vine before she gained attention in social media such as YouTube and Instagram. Vine gave her perfect opportunity to share her talent on the internet. She shared several videos over there. She earned more than 130,000 followers on her Vine account posting funny clips, blogs, and short song covers. Unfortunately, the app was shut down later.

Nowadays, she is active on YouTube and Instagram. Her YouTube channel name is Lizzy Wurst and has over 62 million subscribers. She usually posts challenge videos, pranks, and funny skits. She has uploaded videos such as Huge Jell-O Bath challenge, the Permanent Marker Makeup challenge, the hilarious Whisper Challenge and has her morning and night routine videos along with her boyfriend Lance Stewart, Sabrina Nicole and Big Nik. Her most popular video was the Peeper Challenge which went viral.

Talking about Wurst’s personal life, she is in a love relationship with boyfriend, Lance Stewart. The couple first met during their high school and began dating each other.

Their love story was quite like a movie: she was walking down the hallway and saw Lance for the first time and found him attractive. Then to grab Lance’s attention, she first followed then unfollowed and again followed Lance on Instagram. It definitely took the attention of Lance and the duo started talking to each other and within no time they began dating. The pair also has their love story captured in their YouTube channel.

In her leisure time, she loves to travels. Dubai, Disney World, and Hawaii are some places she wishes to visit someday.

Wurst is one of the successful internet personality who received huge attention in a very short period of time. As per the sources, she uploads videos once a week and the videos in her channel average around 120,000 views per day. This calculation means that she earns around $75,000 approximately every year from the advertisement. Her estimated net worth is $200,000.