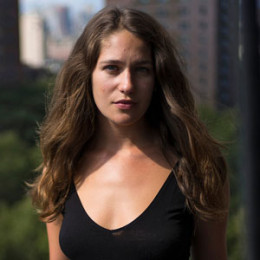 An English-born American actress Lola Kirke is musician and singer-songwriter. She is well known for her featuring roles in Mistress America and the Amazon Studios TV series “Mozart in the Jungle." In 2011, she began her acting career in the film "Another Happy Day." Lola was a cast in "Free the Nipple," and she has also produced and performed in the comedy-drama "Lake City" which was released in 2013.

An English-born American actress Lola Kirke is musician and singer-songwriter. She is well known for her featuring roles in Mistress America and the Amazon Studios TV series “Mozart in the Jungle." She grew up in New York City from the age of 5 by his father Simon Kirke, a drummer for the rock bands Free and Bad Company, and her mother, Lorraine Kirke, the owner of Geminola, a vintage boutique in New York city.

The 26-years-old Kirke belongs to white ethnicity and holds British nationality. She has two sisters, singer Domino Kirke and actress Jemima Kirke. She attended Saint Ann’s School and graduated from Bard College in 2012.

Lola started her acting profession as the character Charlie in the film “Another Happy Day” which released in 2011. In 2014, she showed up in the HBO series “The Leftovers” as a guest star. She is also well known  as her character as Greta in the Oscar-nominated film “Gone Girl."

Kirke had a little but substantial part as Greta in the movie. She also appeared in “Free the Nipple," where she played the role of Liv, a young activist who challenged the city for a sexual orientation imbalance. Kirke has also produced and acted in the comedy-drama “Lake City” which was released in 2013.

Later on, Kirke was given a role of Hailey in Amazon's new series, “Mozart in the Jungle."  She was cast as Margaret in the film “Reaching for the Moon” and that year showed up in an episode of “Law & Order: Special Victims Unit."

Lola Kirke at the Golden Globes 2017

In 2017 Golden Globes, Kirke revealed her unshaven armpits in a strapless, floral Andrew Gn gown was designed to be equally agenda-setting.

The beautiful and young actress Lola Kirke is unmarried and still single. She was often talked about because of her rumored link up with actor Tom Cruise in 2015, and news flew about them tying the knot. Lola and Tom were in Atlanta where they were filming “Mena” together. They have been working together for few weeks and have apparently grown pretty close during that time.

However, both the actors denied their rumors and said nothing was going on between them. So it looks like she is still single.

'Another Happy Day 'actress Kirke has a projected net worth of $3 million dollars. She earned the majority of her income through her acting profession in television series and films.