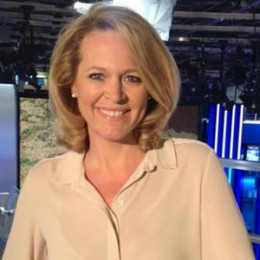 Lorna Dunkley was born on 23 February 1972 in Cirencester. She is an English newsreader, television presenter, and journalist. She is happily married to Brad since 2000.

The former Sky News anchor Lorna Dunkley is an English news presenter, journalist and television presenter. She was a news anchor for Sky News, Sky’s 24-hour TV news network and hosted the weekend afternoon slot from 2 to 5 pm, until July 2016.

When she was six months sold her family moved to Cornwall where she was raised. She belongs to white ethnicity and holds an English ethnicity. She attended the University of Glamorgan (now the University of South Wales) where she graduated with a degree in Communication studies.

After getting her BA degree, Lorna studied post-graduated course from University College Falmouth in Broadcast journalism

Lorna Dunkley worked part-time in both Pirate FM 102 and BBC Radio Cornwall. After finishing her graduation, Lorna began her career and joined ITV Westcountry in Plymouth as a researcher. After that, she became a reporter, covering stories including the Devon road complaints and the environmentalist Swampy’s 8 days long underground protest.

From 2000, Lorna fronted “Westcountry Live”. After going freelance, she joined “Sky News” in 2002, and after a time as a reporter presented Live at Five, Sky News Sunrise, Sky News Today and Sky News at Ten, frequently at weekends.

Dunkley moved from “Sky News Sunrise” to the weekend presenting line-up along with Mark Longhurst, Steve Dixon, and Chris Roberts. In July 2016, she left Sky News, after a round of job cuts.

The talented Lorna has won the “BT Young Journalist of the Year” in 1996, and in 1998, she attended a Buckingham Palace reception as a Young Achiever in Business.

Talking about Lorna Dunkley personal life, she got married to Brad Higgins in 2000. Brad is a lead SOSV investment partner. The lovable couple is blessed with two sons, James Higgins (born in 2008), and Ollie Higgins (born in 2010). The couple is living a happy life in West London with their two sons.

BT Young Journalist of the year winner Lorna Dunkley has an estimated net worth of millions of dollars.

The 8-years-old James Higgins is the first child of his parents, Brad Higgins, and Lorna Dunkley.

The 6-years-old Ollie Higgins is the second children of Brad Haggins and Lorna Dunkley. He has an elder brother named, James Higgins.