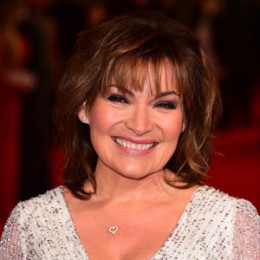 OBE, Lorraine Kelly is a Scottish television presenter and Journalist most known for her work on TV-am, GMTV, and ITV Breakfast. Daybreak and Lorraine are her popular shows so far. Kelly is the wife of TV cameraman Steve Smith. The duo has been married for almost 25 years now.

Lorraine Kelly was born on November 30, 1959, in Gorbals, Glasgow. Her father John was a television repairman.

She studied at the Claremont High school in East Kilbride.

Kelly started her career working on the East Kilbride News and later joined BBC Scotland as a researcher in 1983. In 1984, she served as an on-screen reporter at TV-am covering Scottish news. She presented on Summer Sunday program along with chief reporter Groff Meade in 1989. In 1990 she was appointed as the main presenter of Good Morning Britain with Mike Morris.

In 1993 Lorraine joined GMTV and presented a broad range of programs. She served GMTV for seventeen years. While in GMTV, she hosted programs like Top of the Morning and Nine O’Clock Live. The show Nine O’Clock garnered her the name and fame and later retitled Lorraine Live followed by the titles like LK Today, and GMTV with Lorraine.

In 2010 she presented Daybreak followed by the TV series This Morning. She then worked as a presenter and interviewer for tv show Lorraine. She also narrated the tv show Raa Raa the Noisy Lion in 2011.

Apart from that, Kelly has appeared on Loose Women, Good Morning Britain, 8 Out of 10 Cats, Surprise Surprise!, Live Issue, The Xtra Factor, Have I Got News For You, The New Paul O'Grady Show and The One Show.

Furthermore, Lorraine writes weekly columns for The Sun as well as The Sunday Post. On 7 October 2009, she was announced as the first Agony Aunt for the Royal Air Force’s fortnightly RAF News.

She has been a celebrity patron of Worldwide Cancer Research, the advocacy charity POhWER, and the British Charity Help for Heroes. She is an ambassador and presenter for STV Children’s appeal since 2011. The same year she became an ambassador for the charity Sightsavers.

Kelly has accomplished a lot throughout her career journey. She won the TRIC Diamond Jubilee Award for New Talent of the Year in 1991. In 2004, she got elected as the first female rector of the University of Dundee. Her services to the charity garnered her honorary Doctor of Laws from the University in 2008.

Also, she was also appointed as Officer of the Order of the British Empire(OBE) in the 2012 New Year Honours, for services to charity and the armed forces.

She was the recipient of BAFTA Awards, Scotland for Most Popular Scottish Presenter in 2008 and Outstanding Contribution to Television in 2014.

Kelly is married to her husband Steve Smith, a TV cameraman, since 1992. She is living blissful and contented married life along with her husband in Broughty Ferry, Dundee. The couple is blessed with a daughter Rosie together.

The multi personality Lorraine earns a decent amount as a television presenter and journalist. She has accumulated a jaw dropping net worth of $ 6 million.

Steve Smith is a TV cameraman by profession. He is a very supportive husband and a loving father. It has been nearly twenty-five years of their marriage and still the pair share a strong bond.

Rosie is the first and the only child of Lorraine Kelly from and her husband Steve Smith.