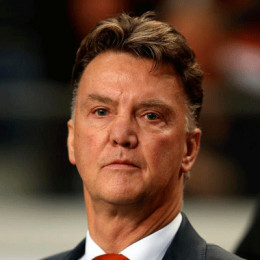 Aloysius Paulus Maria van Gaal is a Dutch football manager. Currently he is manager of Manchester United. He was also former manager of Barcelona, AZ, Ajax, Bayern Munich and also of Netherlands national team. Before being the football manager he was football player. He used to play in the midfielder position in Dutch League. His father was a salesman. His father died when he was only eleven years old.

From 1991 to 1997 Van Gaal was a manager of Ajax and was a very successful tenure. After that in 1997, he moved to Barcelona and had helped the team to win two League championships. Then after in 2012 Van Gaal also became the coach of Netherland. He had won many awards including World Soccer manager Of The Year in 1995, Dutch Sports Coach of the Year in 2009 as well as in 2014.

Louis van Gaal is a married man. He first married to Fernanda Obbes, with whom he divorced in 1994, and also shares two children, Brenda and Renate. Then, Louis married to Truus Van Gaal in 2008.

His first wife his girlfriend Fernanda Obbes. But unfortunately his first wife died of pancreatic cancer in 1994.

Currently he is married to Truus Van Gaal. He is happily married with his wife. He had also went in a holiday in the Portuguese Algarve.

He has two daughters from his first wife. One of his daughter is renate van gaal.

Brenda van Gaal is his next daughter. She is also from his first wife.