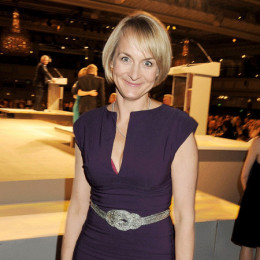 A British journalist, news presenter, and freelance reporter Louise Minchin who is widely famous as Sunday Morning Live with BBC. She holds degree in Spanish from the University of St Andrews. She started her career in journalism by working for Latin American section of the BBC World Service. In 1998 she worked for Radio 5 Live where she presented programs like Drive and Breakfast. She had worked as the co-host on BBC's Real Rescues from 2009 to 2012 . She was awarded with an Honorary Doctorate of Letters degree by University of Chester in 2014.

Talking about her marital status, she is already tied the knot with her longtime sweetheart David Minchin on 6 June 1998.

She talked about her teenage daughters,

"The feet are of Mia, my eldest, when she was six weeks old. Scarlett was born three and a half years later, and I think I might have been short of money at the time so we just had one of her hands done."

"I love the detail on them. Now they’re teenagers, my girls aren’t bothered about them, but they mean a lot to me."

When BBC Breakfast shifted to Salford in 2012, she also relocated to the new place from London with her husband and two kids.

She studied at St Mary's School, Ascot. She received a degree in Spanish from the University of St Andrews.

She is the regular anchor on the BBC One show Breakfast with Dan Walker since 2006. She co-hosted Real Rescues with Chris Collins and Nick Knowles.

She has not disclosed much information regarding him. Together they are parents of two beautiful daughters.

She is very cute and adorable. Her picture along with family can be found in different sites.