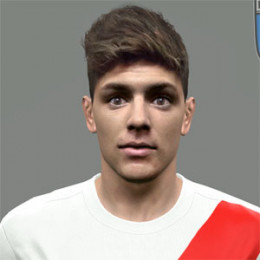 Lucas Boye is an Argentine professional footballer who plays as a striker for Torino. He also played for River Plate. Lucas was nicknamed as El Tanque (The Tank) and El Toro (The Bull). He made his official debut against Ferro in 2013-14 Copa Argentina.

In January 2014, Lucas was called up by Ramon Diaz to play in pre-season for River Plate, which was his unofficial debut, at the Estadio Padre Ernesto Martearena in Salta a friendly against San Lorenzo de Almagro, replacing Jonathan Fabbro. His team lost the match 1-3.

Later, he played a friendly against the countrified team of San Luis, substituting Daniel Villalba in the beginning of the second half winning the match 3-1.

Boye made his official debut in the final tournament of the 2013-14 Copa Argentina against Ferro, River Plate winning in a penalty shootout by 6-5.

In 2014 Torneo de Transicion, he played in a 1-1 tie against Gimnasia y Esgrima. On 31 August, four days after the Argentine Primera Division, Boye scored his first goal in Primera Division with the assist from Tomas Martinez and won the match against San Lorenzo, 3-1.

On February 1, 2016, he signed an agreement contract with the Italian club Torino for four seasons, which started in July 2016.

He was also nicknamed as El Tanque (The Tank) and El Toro (The Bull) for his playing style in the field.

The 21 years old, Boye is not married yet but he certainly has a girlfriend. He has not disclosed much about his lady in the media, however, he has posted a lot of photos of them together on Instagram. There are rumours that they have been together for a long time now.

The young Argentine footballer Lucas Boye, who currently plays for Torino has many fans following on his Twitter and Instagram account because of his playing style and his charming looks. As of 2017, his net worth is estimated to be around $1million.