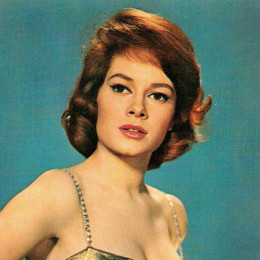 She is an Italian actress, who came to prominence after portraying in SPECTRE and as assassin Fiona Volpe in Thunderball, the 4th James Bond film. She appeared in several films such as Chuka and Muscle Beach Party and has co-starred in 99 Women, the 1969 sexploitation film. Her very first film was an uncredited walk-on part in Three Coins in the Fountain. Details about her family background are unknown.

Talking about her sexuality, she is straight. Till now she has been married twice. She was first married to an American film actor with whom she stayed for almost 2 years. They have raised a son from their marriage. She now is married to the former president of Warner Bros International Television. They have a great chemistry with one another and are living happily together for more than 3 and half decades now. They don;t have any child together. Currently, the couple is enjoying their elderly life.

He is the first husband of Luciana, who is an actor by profession. They have raised a son together.

He is the second and current husband of Luciana, who is a former president of Warner Bros International Television.

He is the only child of Luciana, who was born safe and healthy. He is grown up and currently in his mid fifties. He is happily married to his wife.