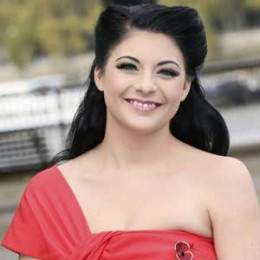 The runner-up of Britain's Got Talent, Lucy Kay is also an opera singer. She signed a deal with Sony Classical Records and recorded several songs. Fantasia is her first debuted album which was listed number 18 on the UK Albums Chart and number 1 on the UK Classical Chart. Lucy played as a narrator in in the UK touring production 2016 of Andrew Lloyd Webber and Tim Rice.

Born as Lucy Kay Allen on 9th June 1989 in England, Kay was raised along with her sister, Emma. Lucy holds British nationality and is of white ethnicity. Gemini is her zodiac sign. She was bullied during her schooling because she was fond of classical music.

Lucy Kay started her musical career from Nessun Dorma where she came in the second position. She participated in Britain's Got Talent, a reality competition series in 2014 where she became a runner-up. David Williams, Amanda Holden and Alesha Dixon were the judges at that time.

Kay signed a multi-album deal with Sony Music in 2014, and during the same year, she released her debut album, Fantasia which was listed number 18 on the UK Albums Chart and number 1 on the UK Classical Chart.

Furthermore, in 2016 it was announced that Kay was given the role of a narrator in the UK touring production 2016 of Andrew Lloyd Webber and Tim Rice. The tour ran from January to July.

On August 2012 Lucy started a romantic relation with David Sandford, a music roadie. They are in a living relationship and live together in Glasgow. Well, till now the couple has shown no intentions of getting married.

However, the lovebirds share a strong bond and are living a happy life together.

The stunning singer, Lucy's actual salary, and net worth are still not revealed to the public. But her recordings deal with Sony Classical might have helped her earn a huge amount. According to her Instagram pictures, it seems that she has a great life.