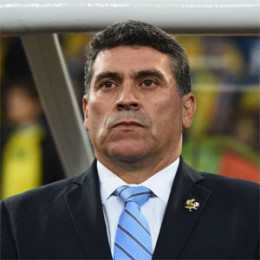 Luis Fernando Suarez is a former Colombian football player, played as a defender and he is currently working as a manager of Colombian club La Equidad. As a manager, Suarez led the Ecuador national football team to the round of 16 in 2006 FIFA World Cup and led the Atletico National to win the 1999 Colombian championship.

In 2005, Suarez led the Ecuador national team to the second consecutive World Cup where the team showed their best performance in their football history and reached the round of 16.

Suarez was offered to continue his responsibility until World Cup 2010, however, after the poor performance in the 2007 Copa America many Ecuadorian fans wanted him out of the team.

Although many people wanted him fired from the responsibility, Suarez said that he would not resign and promised to improve their performance in the 2010 World Cup Qualifiers.

Unfortunately, the team didn’t show their best performance there as well. Initially, they lost to Venezuela in his home ground and later got hammered from the football giant Brazil. Soon after the embarrassing loss to Brazil, Suarez resigned from his job. Later in 2009, he signed with a Peruvian football team Juan Aurich.

Currently, he is the coach of La Equidad.

Luis is one of the respected coaches in the history of Columbia. He was very successful in his starting days, but later it seemed that things were falling apart for him.

Suarez tried his best to take the team to the next level, but he couldn’t do so, rather during his coaching, the team lost its standard which eventually compelled him to give up from his responsibility.

On that verge, Suarez's personal life and marital life were always passive and never got any media attention He is 57 years old and probably married man with children. But he has never talked about his wife and children in media, As far his detail is concerned, he has got an average height of 1.6 m.

Suarez coached the two senior teams from 1987 to 1995. During the time in 2014, he had already trained more than 14 different clubs and given them some excellent platform and skill taking them to a different level. His salary is $14 million USD Dollar, but his exact net worth has not been disclosed.