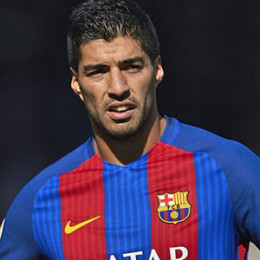 Starting out as a young trainee, Luis Suarez made his professional level debut in 2003 for football team Nacional. Growing up in Salto, he had always wanted to be a professional footballer. After playing for a couple of years for clubs like Groningen, his career took the first hype after he joined the Dutch football giants Ajax in 2007. Afterward, he joined England's Liverpool football club and became the highest scoring scorer in English Premier League season 2013/14. He then moved on a 4 year deal to Spanish giants F.C Barcelona.

He started dating his girlfriend Sofia Balbi at the age of 15. The couple married in 2009 and they have a daughter Delfina Suarez and two sons Lautaro Suarez and Benjamin Suarez.

The sports star is active on Instagram where he frequently shares adorable images of his family.

He amassed an attractive net worth of about $70 million as of 2019.

Apart from his fantastic goal scoring abilities, he is also famous for his strange attacks on opponent players, biting then with his bunny-like teeth.

He has been fined and banned for his misconduct on the pitch with the Serbian Branislav Ivanovic and recently in 2014 FIFA World Cup against Georgio Chilleni. Apart from his career, you can also read about his personal life in this article.

He had been dating Sophia for a long time, before they finally got married amongst friends and family in Uruguay.

Ben was born as the couple's first child, when Luis was playing in Ajax. He was born in a hospital.

She was born as the couple's second child, and the first daughter. During her birth, her father was playing for his country in the South American cup.