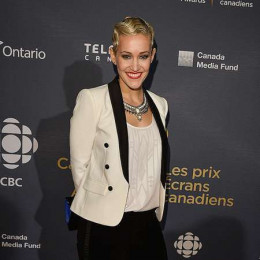 Luvia Petersen is a Canadian television actress, who is noted for her role on the Television series Continuum, where she is part of the main cast. Some of her notable film credits include Sanctuary, Battlestar Galactica: The Plan, Falling Skies and The X-Files: I Want to Believe. Besides acting she is the co-owner and manager of a tattoo studio in Vancouver called Liquid Amber Tattoo. The studio is located in Vancouver's historic Gastown area.

Luvia Petersen is openly bisexual. Since 2015, she has been enjoying her marital relationship with her gorgeous girlfriend, Jessie Robertson.

The actress often made an appearance on several functions and ceremonies with her beloved girlfriend and it seems like they are perfectly made for each other.

Luvia Petersen has worked on several movies and career and earns a good fortune from her acting career. Her estimated net worth might be somewhere $800k ball park.

She is the long time dated girlfriend turned wife of the gorgeous Petersen. They are married since 2015.