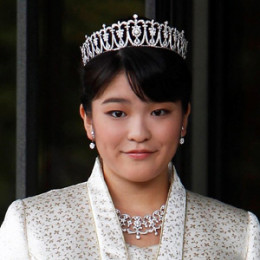 Princess Mako of Akishino, better known as Mako Naishinno, is a member of the Japanese Imperial Family. She works at a law firm and is an affiliate researcher at the University Museum of the University of Tokyo. She came to limelight after she decided to leave the imperial family upon marriage to a commoner, Kei Komuro. The couple recently got engaged is to marry the following year.

Princess Mako Naishinno was born on 23rd October 1991, to Fumihito, Prince Akishino and Kiko, Princess Akishino at Imperial Household Agency Hospital in Chiyoda, Tokyo. She is the granddaughter of Japanese Emperor Akihito, 83. She is the elder daughter of her parents and is sibling sister of Princess Kako and Prince Hisahito. She follows Shinto religion.

She attended Gakushuin School in Primary, Girls’ Junior and Senior High School. She then joined University College Dublin and studied English for one month in 2010. During the period, she had an informal talk with President of Ireland Mary McAleese as a trainee and visited Northern Ireland too.

Later, she completed her degree in Art and Cultural Heritage from the International Christian University (ICU) in Mataka, Tokyo on 26th March 2014. While still an undergraduate she obtained a Japanese national certification in curation as well as a driver’s license.

Also, Princess Mako has received Master’s degree in Museum Studies from the University of Leicester in January 2016 and left the United Kingdom on 17th September 2014. Not only this, she has studied art history at the University of Edinburgh for nine months.

Since 2004, Princess Mako was an internet idol: as she made her television appearance in sailor fuku (a common style of uniform worn by female middle school students). Soon after an image repository was set up and a video featuring fanart of Princess Mako was uploaded onto the popular video-sharing website Nico Nico Douga. The video attracted over 340,000 views and received 86,000 comments.

Soon, the Imperial Household Agency stated that they are not sure to handle the phenomenon and as they were no signs of slander or insult against the Imperial Family.

In 2006, she visited Vienna, Australia for two weeks on a school-sponsored homestay program where she stayed in the home of an Australian man Tatsuhiko Kawashima, her mother Kiko’s father. Being interested in arts and architecture, she also visited the museum, St. Stephen’s Cathedral and Schonbrunn Palace there.

She also participated in her first official function, a religious ceremony at the Ise Shrine which was accompanied by her father.

After she was 20, she was conferred Grand Cordon of the Order of the Precious Crown on 23rd October 2011. Since then, she has been attending several official events as an adult member of the Imperial Family. She volunteered in the 2011 Tohoku earthquake and tsunami in the affected area.

Moreover, she became the project researcher of the University of Tokyo’s museum on 1st April 2016. She is also involved in the different non-profitable organization including Deaf communication and can communicate using Japanese Sign Language.

Princess Mako is engaged to non-royal, Kei Komuro, to whom she first met at the International Christian University (ICU). Their engagement was held at a press conference on the Akasaka Estate in Tokyo on 3rd September 2017 which was announced by Imperial Household Agency.

It was Komuro who proposed to her after dinner one evening in December 2013. Komuro is lucky as he also was accepted by Mako's parents and grandparents.

The media compare Mako’s engagement to that of the paternal aunt, Sayako, Princess Nori: who fell in love with town planner Yoshiki Kuroda and married leaving her royal title in 2005.

Princess Mako tying the knot with Kei Komuro means she has to leave the Japanese Imperial Family and give up her title as Princess as required by law. She is the eight female member of the family to marry a commoner since the passage of the Imperial Household Law. Her marriage ceremony is set to be held in 2018.

Being an Imperial Highness Princess Mako of Akishino, she shares the net worth of her father, Akihito. Her father is the reigning emperor of Japan and has an estimated net worth of $40 million. For now, she lives with her family in the Imperial House of Japan.