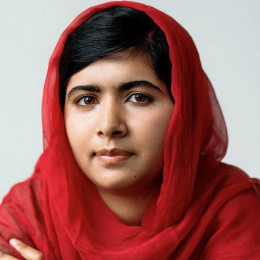 She is a spokesperson for women’s right to education and a youngest Nobel Prize winner. She received the 2014 Nobel Peace Prize along with Kailash Satyarthi for the struggle against the suppression of children and young people and for the right of all children to education. She received Mother Teresa Awards for Social Justice in November, 2012. She is the daughter of Ziauddin Yousafzai, school owner and an educational activist.

Moving on to her personal life, she is yet too young to be married. There is no such details about her relationship status as she is more concerned about the well being of people and society. She became outrageously famous after getting shot by a Taliban gunman on 9 October 2012, as spoke against the local Taliban who had banned girls from attending school.