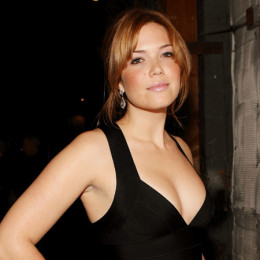 Mandy Moore is an American singer-songwriter and actress. She debuted her single, Candy, which peaked at No. 4 on the Billboard Hot 100. She has won several awards including Teen Choice Awards. She is best known for starring in the hit movie, A Walk to Remember.

Moore was born on April 10, 1984, in Nashua, New Hampshire, U.S. She is an American and belongs to the White ethnicity. She is a daughter of Stacy Moore and Donald "Don" Moore. She was raised in a Catholic environment.

Moore’s mother was a news reporter for the Orlando Sentinel and her father was a pilot at American Airlines. Her ancestors were Russian Jewish, English, and Irish. She has an elder brother named Scott and a younger brother named Kyle.

Moore moved to Longwood, Seminole County, Florida due to her father’s work. She attended the Bishop Moore Catholic High School in Orlando, Florida in 1998.

Moore was fascinated in acting and singing from an early age. At the age of 12, she attended Stagedoor Manor theater camp. She cited her maternal grandmother as one of her inspirations. She starred in a number of local productions in the beginning and has performed the National Anthem at many Orlando based events.

Moore released her debut single, "Candy" on August 17, 1999. The song was a commercial success and ranked No. 41 on the Billboard Hot 100 chart. She also hosted MTV series during Summer in 2000. Her album, So Real received Platinum certification and her second album, I Wanna Be with You, received Gold certification.

Besides, Moore has also starred in popular movies like A Walk to Remember and the animated film, Tangled. She made her movie debut in 2001, voicing a Girl Bear Cub in the comedy movie, Dr. Dolittle 2.

She dated Whiskeytown’s frontman, Ryan Adams. The pair started dating since 2008 and were engaged in February 2009. They tied the knot on March 10, 2009. Mandy Moore has dated many handsome hunks including players, actors, and singers.

Moore filed for divorce after 5 years of their relationship citing irreconcilable differences. The divorce was finalized in June 2016. They do not have any children yet.

Moore started dating Dawes’ frontman, Taylor Goldsmith after divorcing her husband. She officially announced her engagement with Taylor on September 23, 2017. She has no children from any of her relationships.

Professionally he is American singer-songwriter, musician. They had kind of on and off relationship. Their marriage was performed in small ceremony in Savannah. After 5 years of their marriage they got divorce for some personal reason.