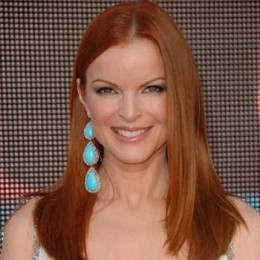 Marcia Cross is an actress of American nationality who has been known all across the world for her television roles. Her most notable role has been as Bree Van de Kamp in the ABC comedy-drama Desperate Housewives for which she has received the Screen Actors Guild Awards, Golden Globe Award as well as the Primetime Emmy Award. She was born in Massachusetts to parents Janet and Mark Cross.

Marcia Cross has been talked about widely in regards to her relationships as well as her professional life. She is a married woman and has been married for the past 10 years. She has also dated two other celebrities from the acting fraternity. She is the mother of twins and has been getting along pretty well in her personal life in regards to her marriage and children.

Tom and Marcia got married on 2006 and they have twin children through in vitro fertilization and are currently married.

From Tom, Marcia has twin daughters Eden and Savannah.

From Tom, Marcia has twin daughters Eden and Savannah.