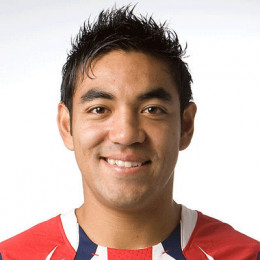 Marco Jhonfai Fabián de la Mora is commonly known as Marco Fabian. He is a popular Mexican footballer and is bound in the Mexican football club Guadalajara. He is currently in a loan spell to Cruz Azul. He is a versatile player and plays both in the midfield as well as forward lineup. He plays for Mexico national football team too. This young and dynamic player has also been nominated for the FIFA Puskas Award. He was also in important man in the squad for Olympic Gold medalist Mexican team for 2012. He was into football from his childhood and started professional career from the age of 17.

Marco Fabian might be in a happy loving relationship. He was reported to have been in a relationship with actress Ana Bekoa in 2012. There are not other reports or rumors so, he is believed to be happy with Ana Bekoa.

Marco Fabian prefers to remain off the screen so far personal life is concerned so, there is not much news about him while he always remains active on the pitch that makes him an amazing player.

Though people usually think that Valentine's Day celebration is just for a couple, Fabian celebrated the day posting pictures of his four friends who are so close to his heart.

He was officially transferred from Eintracht Frankfurt to Philadelphia Union on 8 February 2019 and made his debut on 2nd March.