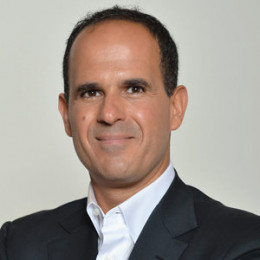 Marcus Lemonis is an American businessman, investor, television personality, and philanthropist. Currently, he is a chairman and CEO of Camping World and Good Sam Enterprises and the star of The Profit, a CNBC reality show about saving small businesses. Lemonis was adopted by a Lebanese and Greek couple living in Miami, FL. He graduated from Christopher Columbus High School in Miami and moved to Milwaukee, WI to attend Marquette University.

Marcus Lemonis is in a relationship with reality television personality, Bethenny Frankel. The couple seems to be very happy so no signs of separation.

Marcus Lemonis was born on November 16, 1973, in Beirut Lebanon. He was adopted by Greek couple, Leo and Sophia Lemonis. Lemonis was raised in Miami, Florida.

Nationality-wise, he is American and belongs to the Caucasian ethnicity. His birth sign is Scorpio.

In 1995, Lemonis earned his bachelor's degree in political science with minor in criminology from Marquette University.

soon after his graduation, Lemonis attempted to win a seat in the Florida House of Representatives with no political experience which results in failure.

Marcus Lemonis was raised in a business family as his grandparents owned two largest Chevrolet dealerships in the USA which inspired him to follow the entrepreneur legacy of his family.

Lemonis began his entrepreneurial journey since 1997, he worked at AutoNation as sales manager. He served as the CEO of Holiday RV Superstores Inc from 2001 to 2003.

Later, he co-founded a company, FreedomRoads and began acquiring RV dealerships. In 2006, he merged his company with Camping World and in 2011 with God Sam Enterprises.

In 2004, Lemonis teamed up with NASCAR as the CEO of Campaign World. He also worked as a serial entrepreneur and helped many troubled businesses. Lemonis also expands his portfolio in the automatic industry.

RV Business Magazine named him,  "Newsmaker of the Year" for having "more impact on the industry than any single individual or company in recent memory as an agent of change and retail consolidation" in 2007.

In 2017, Campaign World announced the acquisition of the assets of Gander Mountain and The House Boardshop.

Besides this, Lemonis also featured on two episodes of NBC's Celebrity Apprentice. In 2012, he was seen in the episode of ABC's Secret Millionaire. After a year, he became the star of the CNBC reality show, The Profit.

In 2017, Lemonis also appeared in the CNBC program, The Partner which he co-produces too.