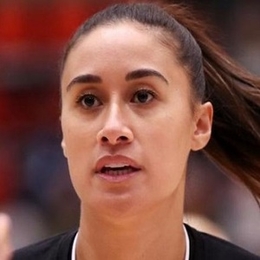 Perfect match for each other, controversial couple, Maria Folau and her boyfriend turned husband Israel Folau have been together for nearly four years. But, what makes their marriage notorious?

Maria Folau got married to husband Israel Folau on 15th November 2017, ironically on the same day, the majority of Australia voted in favor of same-sex marriage. Their marriage, however, was just a rumor until Israel confirmed it with a wedding picture of the couple a week later on 22nd November. 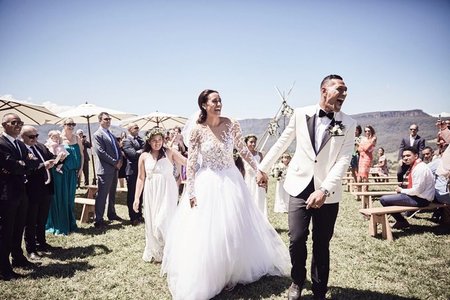 As showcased by the picture shared on Twitter, the bride aka Maria stunned in a netted full sleeve bridal gown designed by Adrienne Winkelmann. The gown was followed by a long veil with a light makeover and Maria having her hair slicked back in a bun. Israel matched Maria with a white and black tuxedo.

The intimate outdoor ceremony of Mr. and Mrs. Folau took place at Kangaroo Point in Australia. Maria and Israel dated for nearly two years before they walked down the aisle. Israel was the first to confirm their relationship in February 2016 when he shared a picture of Maria with the caption that read, "WCE" not long after flirty texts of the two surfaced. 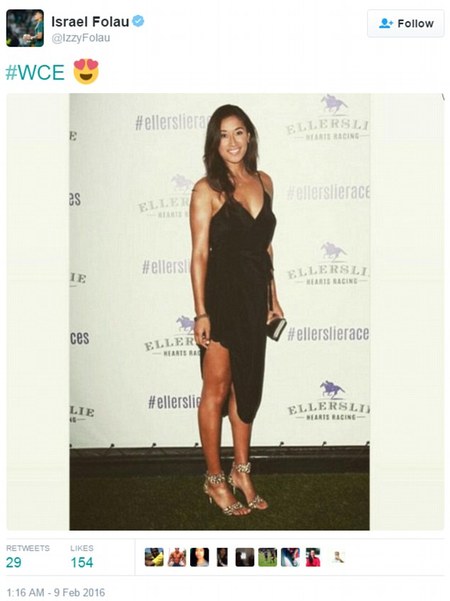 Less than nine months later of their romance, Israel popped the question in October 2016. Maria who stands at a towering height of 6 feet 2 inches tweeted a selfie along with her fiance as she flaunted the engagement ring along with its box.

Soon after their marriage, Maria, whose birth name is Solonaima Maria Tuta'ia changed her last name to Folau. Sharing their lovely wed pictures on social media, Maria said: "Two imperfect people who refuse to give up on one another." 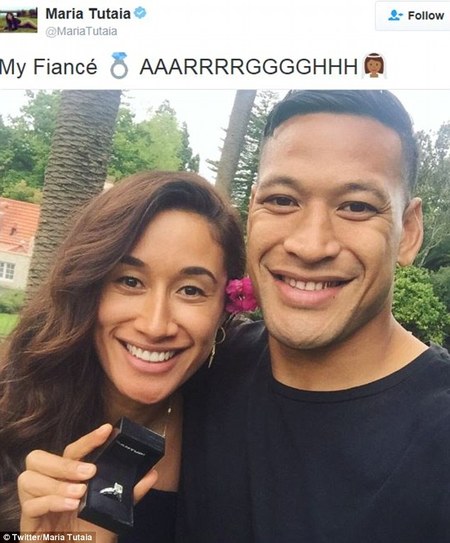 As for Israel, he captioned their wedding picture with a verse from the Bible: "He who finds a wife finds what is good and receives favor from the Lord." And, for their honeymoon, the then-newlyweds jetted off to the Maldives.

On 14th March 2020, several reports claimed that Maria and Israel were expecting their first child with Maria to be expected to be in her second trimester. But, by the end of March, neither the former netball player nor her partner addressed the rumor.

The couple resides in Sydney Australia where Israel has been living for most of his life.

Both Maria and her Wallabies rugby pro husband are strictly Christian and has publicly claimed their disagreement over same-sex marriage. Although Maria has never spoken any words on same-sex marriage, she has endorsed her husband who made controversial remarks on Instagram over the LGBTQ community that 'hell awaits' for them. 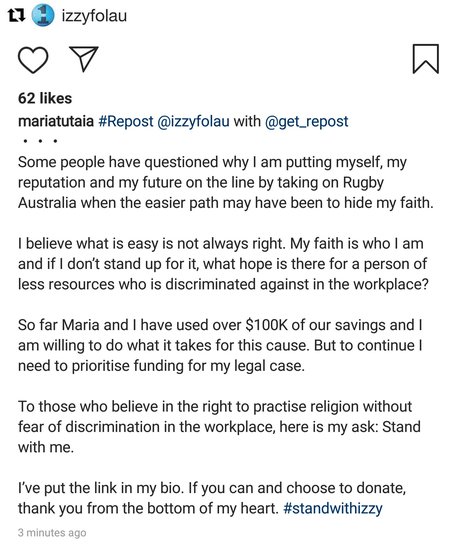 Maria Folau supported her husband when he was terminated by Rugby Australia. SOURCE: Maria Folau Instagram

Not to mention, Israel publicly made a tweet suggesting that he doesn't personally support same-sex marriage. In his true words, he said: "I love and respect all people for who they are and their opinions. but personally, I will not support gay marriage."

After Israel was terminated for his stance on homosexuality by the Rugby Australia, the Tokoroa born didn't hold back to show her support for her husband. And, this almost put Maria's career in danger too.

Although Maria wasn't banned by the associations she dealt with, sponsors and organizations like Netball South Australia, ANZ, and Health Insurance company (HCF) were outspoken to share that they don't share the same values as her over LGBTQ community.

Career & Net Worth Of Maria Folau

Over the nineteen years of her tremendous career as a Netball champion, Maria Folau never missed a chance to show what she was capable of with her hand and the ball. 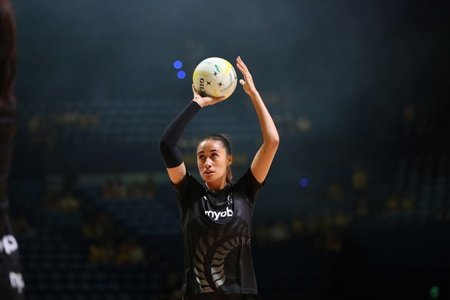 A pro champ since her school days where Maria was a captain of the Netball team, she had a lot of national and international attention on her since her early days. Enjoying her Netball successes from being included over the U21 team of New Zealand, Maria supported the national team on winning the 2005 World Youth Cup.

With making thousands of dollars through those years, Maria Folau can be estimated to have a networth of no less than $1 million.

See more Biographies and News only on Marriedwiki.com.

Notoriously popular Australian Rugby player is the husband of Maria Folau who hails from New Zealand.