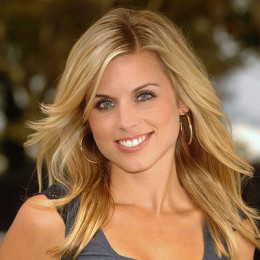 She is a television personality hosting for Fox TV Network. She appeared on television from the age of eleven. She has made her own identity in the American television world so mentioning her parents' name is not so important. She has worked for most of the major television networks, including ABC, NBC, MTV, TV Guide Network, Yahoo!, CBS Sports, and ESPN.

She has worked as TV host from her childhood and continued it throughout her college time. Though she has graduated in political science, she shows more interest in entertainment journalism. She is a married girl with a happy family, including a kid. Her attractive face and a charming voice manages to capture the heart of her viewers effectively. Her presentation skills need some applaud as well.

She married Joshua at Saint Andrew Roman Catholic Church. It seems that Joshua treats her wife very well based on their image in the media. On mid-2013, Maria announced the upcoming of their first child and eventually became a mother in the last day of 2013.

Maria seemed extremely happy when she called herself Grace's mom. It was her first experience of giving birth and it went well. The whole family is living happily as of now. We surely hope they raise their kid well. After all she is the face every LA people see early in the morning and saying Good Day LA.