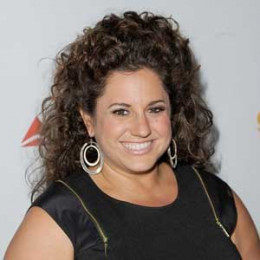 Marissa Jaret Winokur is an American actress mainly known and credited as Marissa Winokur. The Tony-award winner, Marissa is well known from the John Water's film, Hairspray and also from an American sitcom, Stacked written by her husband, Judah Miller. She was also one of the participants of the Dancing with stars. Her hard work helped her to win Drama Desk Award, Outer Critics Circle Award, and Theatre World Award too.

Born to Maxine Winokur (a teacher) and Michael Winokur (an architect) on 2nd February 1973 in New York City, New York, Marissa grew up along with her three siblings in Bedford Village, New York in a Jewish family. Marissa is the niece of S.J Perelman and Nathanael West, two famous American writers.

Marissa completed her high school from Fox Lane High School and was a captain of the soccer team of her high school team. She was also a cheerleader during her high school period. Winokur studied musical theater in American Musical and Dramatic Academy in Manhattan for two years and graduated from the integrated program.

In 1994-1995, she joined the touring company of Grease and debuted with the role of Pink Lady Jan. During the 90s, she was cast in an American musical for which she won Tony Awards for Best Leading Actress in 2003.

Winokur played many small roles in various films including- American Beauty, Never Been Kissed, and Fever Pitch. She gave her voice to the children's music album and also featured on the soundtrack for the movie, Son of the Mask and so on.

Moreover, in 2005 she worked in Stacked, an American sitcom along with Pamela Anderson. Judah Miller, her husband, appeared as a writer. Later on, she participated in the Dancing with the Star, Season 6 partnered with a professional dancer, Tony Dovolani.

In 2010-2011 Marissa was among the six co-hosts of CBS's The Talk and resigned in 2011. Furthermore, in 2014 she featured in a pilot for the sitcom, The First Family and Always a Bridesmaid.

On 7th October 2006, Winokur married Judah Miller, the writer of Stacked. They firstly met in the casting of Stacked and engaged in 1994.

Furthermore, they announced that they were expecting a baby through a surrogate mother. The couple's first child is a boy named, Zev who was born on 22nd July 2008. The family seems happy together and living a cheerful life.

Talking about her health condition, she suffered cervical cancer during her casting in the Hairspray in 2001. Later in 2003 she underwent surgery and returned to Broadways being healthy and cancer-free. In 2012, she lost almost 60 pounds through dieting.

The beautiful actress, Winokur has an estimated net worth of $3 million. Acting is the main source of her income and earned much from the field. In 2006, she featured on a charity album, Unexpected Dreams- Songs From the Stars.

Marissa Winokur married the writer of Stacked, Judah Miller on 7th October 2006. They firstly met in the set of Staked, an American sitcom.

Zev Miller is the only son of Marissa and Judah Miller who was born on 22nd July 2008. He was born through a surrogate mother.