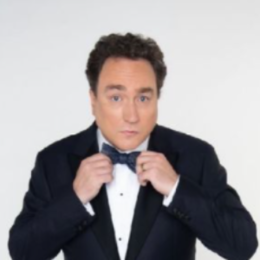 Mark Critch is an American actor, writer, and comedian best known for his appearance in the Canadian television comedy series, Son of a Critch. Other than that, Critch earned huge fame for his work in the comedy series, This Hour has 22 Minutes.

Actor Mark Critch is a married man who blissfully walked down the aisle with his girlfriend turned wife Melissa Royle on August 6, 2019. The lavish wedding ceremony took place in Trinity, Newfoundland, with close friends and family. 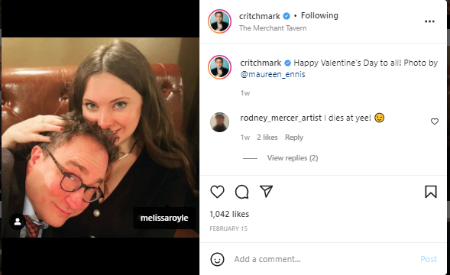 On their big wedding day, Critch wore a blue-black tuxedo while his wife Melissa was stunned in a custom-made bridal gown. On the very day, the Canadian actor posted a beautiful snapshot of the two, captioning "Married" with a heart, and drink emoji.

Before marriage, the lovebirds exchanged vows on May 23, 2018. Mark proposed his lady love by getting down on one knee in the middle of the road with matching blue jeans and blacktop. 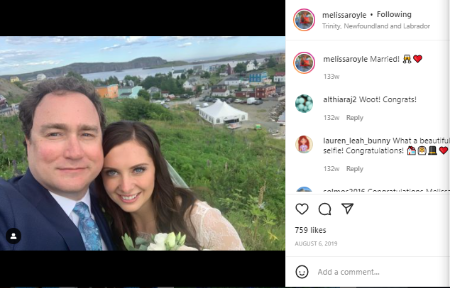 Critch was romantically linked to Melissa Royle for many years before their big day and engagement. And the duo was also captured on their many date nights. As of now, Critch and his wife do not have any children to date. In fact, Mr and Mrs Critch seems to be focusing on building their career rather than expanding their family members.

What is Mark Critch's Net Worth?

Mark Critch was interested in philanthropic works from a young age. In fact, Mark is famous at Labrador and Newfoundland for his charitable works. Mr Critch provides his hands as honorary chairperson for the Victoria Park Foundation and fundraising patron of O'Brien's Farm Foundation.

Besides, Critch has hosted and organised fundraising campaigns for the Parkinson's Society of Newfoundland and Labrador and the Heart and Stroke Foundation. On 7th December 2017, Wonderful Grand Band released Babylon Mall's re-recorded version on Avalon Mall's 50th anniversary. During the time, proceeds from the song remake were given away to the Tommy Sexton Centre.

Mark Critch - Famous for Son of a Critch

Actor Mark Critch is widely popular for starring in Son of a Gritch, a story based on the childhood and adolescence of Mark Critch. At the beginning of the series, 11-year-old Mark grew up in 1980s Newfoundland, where he planned to start junior high school by making friends and connecting with the few people in his limited world.

The show also stars Malcolm McDowell, Claire Rankin, Benjamin Evan Ainsworth, Richard Clarkin, and Mark Critch himself. Critch published the memoir in Newfoundland, and in June 2021, CBC announced they ordered to make the Son of a Critch series.

That's not all, as the series made its Canadian broadcast premiere on CBC television on 4th January 2022. Notably, more than 941,000 viewers watched the series on its January 4, 2022, debut. In fact, the show became the twentieth most-watched series in Canada that week.