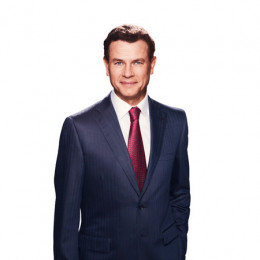 Mark Ferguson is an Australian news presenter and is currently working for Seven Network. He is weeknight Seven News presenter. Before Seven Network, he was associated with Nine Network. Family man, Ferguson is active with social works too. With his work profile filled with numbers of impressive work experiences, he has also notable charities credited upon him. He is supporting junior journalism scholarship for the school where his kids study.

Mark Ferguson is a married man and has respected social life too. With three children, he is living fulfilled married life. There are no rumors about his personal life however, his interests on World War II and social involvements are often talked about. Ferguson is Good Will Ambassador for a charity organization named Good Beginning. He is dear among his friends and is also called as Fergo with love.

Jack is eldest son in the family. He is twelve years old and is loved by his father and mother. He is cute and charming.

Ted is second son in the family. He is cute and very lovable too. He is loved by his elder brother a lot and he is also dear to his father and mother.

Paddy is the youngest son and is loved by everybody in the family. He is sweetheart to everyone. He is five years old.