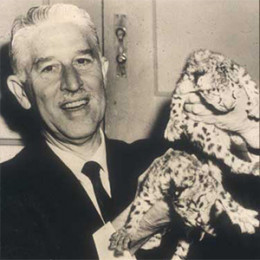 Marlin Perkins was an American Zoologist and television personality. Richard was born to father Joseph Dudley Perkins and mother Mynta Mae Perkins and spent his childhood with an aunt. At the age of seven, Marlin was already creating his own Zoo. He became the national figure with the live show called Zoo Prade and was best known for the television program; Mutual of Omaha's Wild Kingdom.

The fame host, Marlin Perkins did face controversy when allegations were made via Cruel Camera on the episode of CBC program. He was married twice and had three children. Perkins had an important role to establish the Wild Canid Survival and Research Center (WCSRC). Marlin died of cancer at the age of 81. A statue of Perkins was built at Central Park in his hometown of Carthage, Missouri.

Marlin was first married to Elise More. They divorced later and the cause of divorce was not revealed.

Carol Morse Cotsworth is the second wife of Marlin. She was buried next to her husband after her death.

Marguerite is the first daughter of Marlin with Carol. There is not much information about her on the internet.

Alice is second daughter of Marlin. There is no information about her except a few photos.

Carol Morse Cosworth and Merlin Perkins third child’s name is Fred Cotsworth. There are no sources about him.