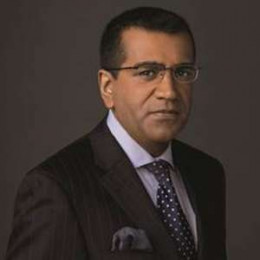 A NBC channel journalist who works in political commentator for MSNBC, hosting Martin Bashir. Previously, he used to work as an anchor for ABC's Nightline. He is also a writer and an actor, known for Living with Michael Jackson: A Tonight Special. His parents were Pakistani Christian. He graduated from King Alfred's College of Higher Education. He is diagnosed with Brain Tumor. In 1996 he was chosen as Royal Television Society's Journalist of the Year. He rose to fame from his interview with princess Diana talking about her failed marriage to the Prince of Wales.

He was suspended from ABC News after he made controversial speech in Asian American Journalists Association convention in Chicago. About his personal life, he is already married. He is very loyal towards his wife. He has not involved himself in any kind of extra marital affair that can hampered his present marriage relationship. The couple is blessed with three children but no information has been disclosed on them. The family lives in Wandsworth, England.