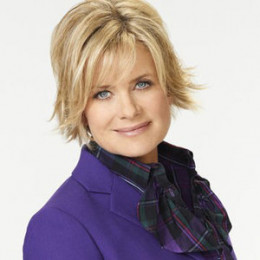 Mary Beth Evans is an American television actress, known for her role as Kayla Brady on days of Our Lives. Mary is a multi-talented entertainer, has also worked in theatre, as a reality television judge and as a producer on the popular web series, THE BAY. She is a columnist, blogger and entrepreneur. Evans has been nominated and won awards for her direction. Mary Beth is the youngest child of her parents along with her one older brother and two older sisters.

Mary Beth Evans married cosmetic surgeon Dr. Michael Schwartz. They were dating for 1 year after getting together in 1984 and were married in 1985.They have been married for 30 year. They have three children, Daniel Luke, Katherine Elizabeth and Matthew Joseph. These two are still together living happily. This couple along with their children resided in Southern California.She has dated actor Stephen Nichols at one time.

Mary Beth Evans husband is cosmetic surgeon, Dr. Michael Schwartz. They dated for a year after getting together. They have three children and resides in Southern California.