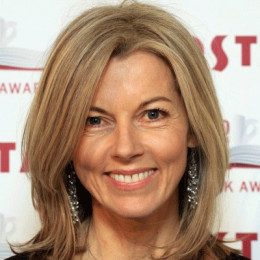 Mary Nightingale is an English newsreader and a television presenter. Started her career in journalism as a presenter and writer for the WBS TV Tokyo, she earned popularity serving as a presenter in the daytime cookery series, Britain’s Best Dish. She currently serves as a presenter for the ITV Evening News.

Nightingale was born on May 26, 1963, in Scarborough, North Riding of Yorkshire, England. She is an English by nationality and belongs to the White ethnicity.

Nightingale received her education at St Margaret's School, an independent school for girls in Exeter, Devon. Later, she moved to King Edward VI School in Totnes, Devon. She earned a BA in English from the University of London, Bedford College (now Royal Holloway, University of London).

Nightingale is a married woman and has two children. She married Paul Fenwick, the former Human Resource director of a travel company named Trailfinders. The pair tied the knot since April 2000.

Nightingale had a miscarriage in February 2001. She gave birth to her first child, a daughter on January 15, 2003. She was honored with TRIC Awards for Newscaster of the Year.

Nightingale is active in social works as well. She has sponsored many of charities including the Rainbow Trust, The Willow Foundation, Mariposa Trust and Action for Children. She is an ambassador for The Prince’s Trust. The Trust was founded by Charles, Prince of Wales.

As per some online sources, Nightingale has an annual salary of $300k. She has a net worth around $2 million.

He is the former Human Resource director of Trailfinders. The two had dated for a brief while and got married. They have two children together and are living happily.

She is quite grown up now and goes to school. Not much information is available on her. She is a beautiful girl.