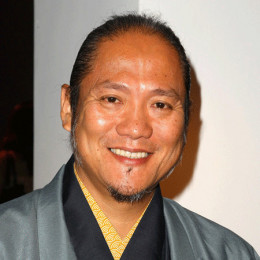 A Japanese chef who earned world wide popularity after his appearances on the Food Network's program Iron Chef. He is also famous for his unique style of presenting food. He got his training in traditional Kaiseki cuisine in Hiroshima. In 1980 he opened his own restaurant in Hiroshima after five years he decided to sell the restaurant and travel around the United States. While he was in US he worked as executive chef for dining area for Sony Corporation's executive staff and visiting VIPs. Later in 2001 he opened his own Morimoto restaurant in Philadelphia. He has also made appearance as guest judge on Top Chef and Hell's Kitchen.

Talking about his marital status, he is a married man. He has not revealed much information regarding his wife. Together the couple is parents of three children. He hasn't disclosed the names of his children. In an interview, he told that he is a family man and he loves to spend his time with his family. According to him, he frequently takes his three children to Japan so that they can learn Japanese culture.

Masaharu Morimoto was born on May 26, 1955, in Hiroshima, Japan. He is Japanese and belongs to the Asian ethnicity. She attended the Tamagawa University and earned his graduation.

Morimoto opened his own restaurant in early 1980 after receiving the practical training in sushi and Kaiseki cuisine. He worked in various prestigious Manhattan's restaurants including, as an executive staff and visiting VIPs in Sony Corporation, as executive chef in Sony Club and as head chef at Japanese restaurant Nobu.

They have already crossed more than three decades of their successful marriage life. She has given birth to three beautiful children.