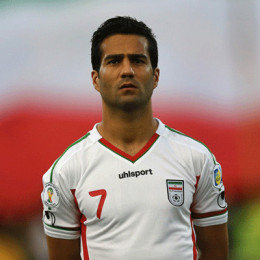 Masoud Shojaei is an Iranian professional football player who is currently playing in the Qatari club Al-Shahania Sports Club since 2014 and in the Iran National Football Team as a midfielder wearing jersey number 99. He is very good at dribbling and passing.

Masoud Shojaei is a married man as revealed by many relevant sites but no official confirmation has come from his side. He is a proud Muslim and openly supports the causes like the Iranian Green Movement.

Masoud Shojaei was born on June 9, 1984, in Iran under the birth sign of Gemini.

He started his youth career at Sanat Naft in 1999 and later moved to club Saipa but he made his professional debut from the Sanat Naft in 2002. He has been playing in the National Team since 2004 and has represented his nation in two World Cups.