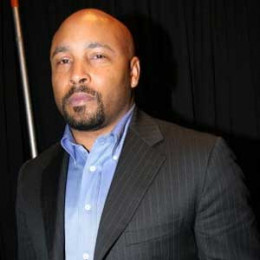 Mathew St. Patrick is an American actor known for his performance in HBO drama Six Feet Under and Keith Charles. Due to his performances, he was nominated for best performance title for several years. He is the supporter of the Elizabeth Glaser Pediatric AIDS Foundation. Mathew has a baby boy named, Tommy but has not revealed about his wife or girlfriend.

Mathew was born on 17th March 1969 in Philadelphia, Pennsylvania, United States. He was raised along with his brother and sister. Mathew did his schooling from Olney High School and later on graduated from Scotland School for Veterans' Children (the last school for the children of military veterans in the US), Scotland, Pennsylvania in 1986.

After graduation, he lived in New York and then eight years in Chicago. Patrick worked as a delivery boy for UPS, Coca-Cola, and as a salesman for a furniture store and Pacific Railroad. He was interested in games and fashion but later began his career in the acting field.

Mathew moved to Los Angeles to start his career in 1994. Over there he worked as a personal trainer. Later on, in 1996 he joined West Coast Theater Ensemble. Right from there he started his professional career from the TV series, NYPD Blue as Rickie.

Moreover, he acted in many television series like- All My Children, General Hospital, Surface to Air, Diagnosis Murder, Moesha, Beverly Hills 90210, Private Practice, Sons of Anarchy and Alien Riders and so on. Mathew earned massive popularity after the role in Six Feet Under.

Mathew was nominated for the outstanding performance by an Ensemble in a drama series by screen actors Guild Awards from 2001-2005. His name was also listed as a Sexiest Men Alive by People's Magazine in 2001.

The television series actor, Mathew does not want to reveal about his personal life, so he kept a low profile, and no such information are out. He has a son named, Tommy. Patrick and is a single parent. He is doing his best to fulfill his parental responsibilities and duties. But no information is revealed about his wife or girlfriend.

Mathew has no such records of dating and marriage. Some fans even doubted about him being gay. But as per an interview with TV Guide, he declared that he is straight.

Mathew has not revealed about his net worth. But it is sure that he might have a good net worth as his series are really appreciated. He is in the acting field for nearly two decades so he might earn a good amount for sure.

Mathew St. Patrick has a baby boy named, Tommy Patrick. He is fulfilling his parental responsibility. But Mathew has not revealed about Tommy's mother.