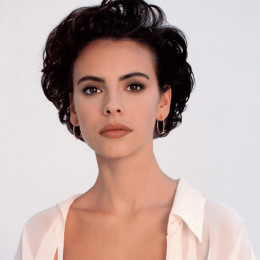 Facts of Mathilda May

Relationship short Statistics of Mathilda May

A French film actress who is better known for her role as Isabella in 1997 action film The Jackal. She is daughter of playwright Victor Haim and choreographer Margareta Hanson. She is of Greek and Turkish Jewish descent. Inspired by her mother she was fascinated in dancing from her young age. When she was just 16 years old she won First Prize of the Paris Dance Conservatory. She has already appeared in movies like Lifeforce, Naked Tango, Becoming Colette and so on. In 1985 she debuted in Hollywood starring in the role of an alien "vampire" in science fiction horror film Lifeforce.

Talking about her marital status her married life was not successful as her career. She was married thrice and all of her marriage ended in divorce. Her first marriage lasted only for three years. After her first divorce she married an actor. Together they were parents of two children. Again after six years of her marital relationship, she divorced him too. Her third marriage also ended in divorce. Currently she is single.

He is her first husband. Their marriage relationship lasted only for three years. They had no children from their marriage.

Professionally he is a French movie actor and singer. Together they were parents of one daughter and a son. They have already divorced.

Their marriage relationship lasted only for six years. They had no children from their marriage. Reason behind their breakup is still unknown.

She is the elder daughter of the family. She is very gorgeous.

He is very adorable kid. His picture along with his family can be found in different sites.