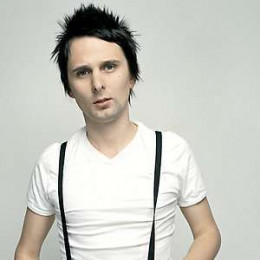 Matt Bellamy is a multi-talented person. He is a singer, record producer, musician, composer, multi-instrumentalist, and vintner. He is famous as the lead vocalist of the rock band 'Muse'. He is the son of rhythm guitarist George Bellamy and Marilyn Bellamy. Matt grew up with his mother and brother after his parents' divorce. At the age of six, he began playing piano and by the age of twelve Bellamy played piano at Teignmouth Community College event.

Bellamy was engaged to an Italian psychologist Gaia Polloni but got separated in 2009. He began dating American actress Kate Hudson since 2010 and the couple were engaged in April 2011. Three months later, Hudson gave birth to the couple's first child named Bingham Hawn Bellamy, in July 2011. In December 2014, it was announced that Bellamy and Hudson were separated. Since February 2015, Bellamy has been dating model and actress Elle Evans, who also starred in their band's music video "Mercy."

Bellamy began dating American actress Kate Hudson from 2010 and engaged in April 2011. In December 2014, it was announced that Bellamy and Hudson had separated.

Bingham Hawn Bellamy's mother is Hudson. He is the first child of Matt Bellamy and Hudson; he was born in July 2011.