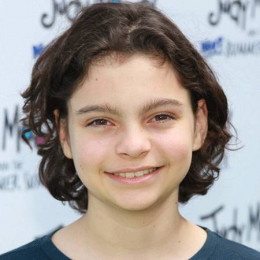 An American actor who is widely known for his role as Max Braverman which is a character with Asperger syndrome, on the hit NBC series Parenthood. He was greatly inspired by his parents because his parents were also former actors. He went to Campbell Hall School. He has keen interest in playing baseball, tennis, karate, swimming and playing the piano. He has already starred in popular movies like The Purge (2013), Parenthood (2010) and Daddy Day Care (2003). He has also lend his voice to the role of Roo on My Friends Tiger & Pooh.

Talking about his personal life he is too young to get married. He has not disclosed any information regarding his girlfriend and neither have been spotted dating one. Since he has already won Best Performance in a TV Series - Supporting Young Actor at very young age, it seems like he is more focused in building his career in acting. He is regular user of Twitter and his fan can follow him in his Twitter account @MaxBurkholder to be more updated about him.