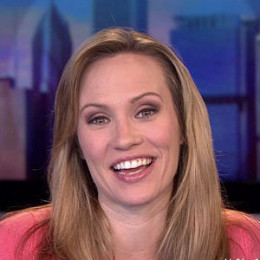 Megan Linnea Glaros is an American meteorologist and entertainment reporter for WBBM-TV in Chicago. She has worked effectively for various reputed weather channels and television networks such as WTAP-TV in Virginia, Sinclair Broadcast Group in Maryland, WLPG in South Florida, ABC Television in New York City and so on. She is regarded as one of the most outstanding graduates of Indiana University. She was an NFL cheerleader for the Indianapolis Colts for a few months in 2002 before taking her first job in television.

Megan’s family consists of her husband Lance Bruggeman, an Automation and Process Control Engineer at ACE Technologies in Chicago, and their three beautiful children. No other dating or boyfriend rumors about the lovely meteorologist are available.

She and her family reside in St. John, Indiana, about 40 miles southeast of Chicago, Illinois. They are supportive of each other personally and professionally, so are able to sustain their relationship so longer than the others around them.

Megan Glaros was born Megan Linnea Glaros in 1972 in Dyer, Indiana, United States. She is American and belongs to the White-American ethnicity.

She attended Texas Christian University. Then she went to Indiana University from where she studied atmospheric sciences and journalism. She modeled professionally during her high school and college.

In September 2004, she moved to South Florida and became the Local 10-morning news meteorologist. She also hosted a show, SportsJam Live. She was an NFL cheerleader for the Indianapolis Colts before pursuing her career in journalism.

She covered active hurricane seasons of the past few years like Hurricanes Katrina, Rita, Wilma and many others. Later she moved to Parkersburg, West Virginia and quickly shifted to Baltimore, Maryland where she worked for Sinclair Broadcast Group.

In 2006, Glaros received her American Meteorological society seal, she is also a member of the National Weather Associations. She joined the WCBS-TV in May 2008 and served as the weekend morning meteorologist and as an entertainment reporter during the week.

In 2010, Glaros served as a meteorologist for the station's early morning news, effective August 30 in Chicago CBS O&O WBBM-TV. She also worked for CBS this Morning.

Megan Glaros is a married woman, she tied the knot with her boyfriend, Lance Bruggeman. The duo tied the knot in 2003 at an intimate ceremony in the presence of their closed ones and family members.

Currently, she resides in St. John Indiana along with her husband and children.

Megan Glaros is one of the reputed journalists, she has an estimated net worth of millions but the real figure is yet to reveal.  She served in WBBM-TV and normally, the average salary of WBBM-TV employee is more than $65k. She might also earn the same amount.

She is happily married to Lance Bruggeman, an Automation and Process Control Engineer. Together they are blessed with three beautiful children.

She gave birth to a daughter, Lana, on February 11, 2010. She is the first daughter to this family.

In June 2012, she gave birth to twins. And she is the baby girl among them.