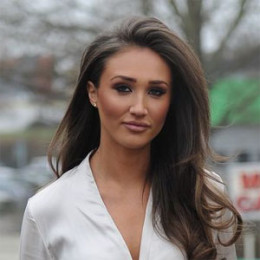 Megan McKenna, 25, is an English media personality who is best known for her appearance on the MTV reality series, "Ex on the Beach." She made her television debut in 2009 with the third series of "Britain's Got Talent." Additionally, she is actively involved in music starting from 2017.

Megan McKenna was born on September 26, 1992, in Essex, England to Dave McKenna and Tanya McKenna. Nationality-wise she is British and belongs to Caucasian ethnicity. She grew up along with his sister, Milly McKenna in Barking, UK.

McKenna is interested in singing and dancing since her early days. She went to ArtsEd Theatre School and learned acting.

McKenna made her TV debut with the third season of Britain's Got Talent in 2009 and made it to semifinals. However, she rose to fame after appearing on the MTV show Ex on the Beach. Later, she participated in the seventeenth series of the Celebrity Big Brother.

She was also seen on the reality television series, The Only Way Is Essex and even auditioned for The X Factor. Furthermore, she also appeared in the Open Mic UK, The Saturday Show, Big Brother's Bit on the Side, This Morning, The Wright Stuff, Celebrity Juice and much more.

In 2017, Megan opened her own restaurant in Woodford Green, MCK Grill. The same year she starred in her own show named There’s something about Megan which aired on ITVBe.

The current relationship status of Megan McKenna is possibly single, but only a few months ago she was romantically involved with Pete Wicks. The duo started dating from April 2016, but in between, due to sex text scandal they split up in September.

Later, the couple again got back together but again broke up in March 2017. Their emotional scenes aired on Towie on October 18.

In the past also she was linked up several men such as; Scott Timlin, Jordan Davies, Stephen Bear and Rogan O'Connor.

The reality star, Megan McKenna has collected a huge sum from her career as her net worth is estimated around $3 million, while some online sources have mentioned the figure, no official confirmation has come from it.