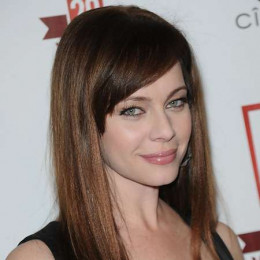 Melinda Patrice Clarke also known as "Mindy Clarke" is an American actress, known for portraying Faith Taylor on Days of Our Lives, Julie Cooper on The O.C., and Lady Heather on CSI: Crime Scene Investigation. Her most recent and noted role was on the action-thriller television series Nikita, where she portrayed Amanda. This gorgeous lady was born to John Clarke, an actor and Patricia Lewis, a ballet dancer.

Accounting her personal life, till now she has been married twice. Her ex-husband is an actor by profession with whom she got married in the year 1997. Detailed information about their divorce is not known. From her first marriage, she has raised a beautiful daughter. Currently, she is enjoying her second marriage. Her second marriage has been kept a bit of suspense from the media group.

He is the first husband of Clarke, who by profession is an actor. The two were married in Dana Point, California.

He is the second husband of Clarke, whose personal details has been kept out of media's radar.

She is the only child of Clarke, whom she gave birth at the age of 30.