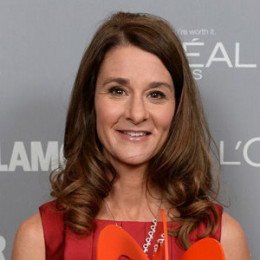 Melinda Ann French aka Melinda Gates, is an American businesswoman and philanthropist. She worked as a project manager for Expedia, Microsoft Encarta and Microsoft Bob. In 1986, she graduated with a bachelor's degree in computer science and economics from Duke University and earned MBA from Duke's Fuqua School of Business in 1987. She is the daughter of Elaine Agnes Amerland, a homemaker and Raymond Joseph French Jr., an engineer.

She is none other than the wife of Microsoft's co-founder Bill Gates. The two first met while working at Microsoft Company. They have raised three children: 2 daughters Phoebe Adele Gates and Jennifer Katharine Gates and a son Rory John Gates from their marriage. The couple is active in various charitable works and as of 2014, they have donated more than US$30 billion to the Bill & Melinda Gates Foundation, whose aim is to reduce poverty, enhance healthcare and create educational opportunities.

He is best known as the co-founder of Microsoft, the world's largest PC software company. His actual name is William Henry Gates III. They were married in a private ceremony held in Lanai, Hawaii.

This beautiful young lady is the first child of Melinda and her husband.

He is the only son of Melinda, who is often pictured having fun with his parents.

She is the youngest member in the family, whose images can be viewed on the internet easily.