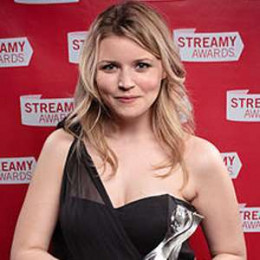 Meme Molly is an internet personality known for hosting the video blog "Rocket boom" from 2009 to 2011. She grew up with her parents and started her career making youtube videos secretly in her bedroom. At the age of sixteen, her parents found out her video makings. Meme studied at Emily Carr University of Art and design and then went to New York to work as a host. She also wrote and produced at Rocketboom.

Meme Molly left Rocketboom in 2011 and was later employed by "My Damn Channel" as a director of Talent and Audience development. MemeMmolly’s channel on YouTube became once No. 10 on the all-time most-subscribed list for the United Kingdom. Her channel has over 100 thousand subscribers and 53 million video views. Her video "Are you anybody’s favorite person?" was nominated for "Best Commentary video’’ youtube award in 2007. Molly has not revealed anything about her personal life and relationships.