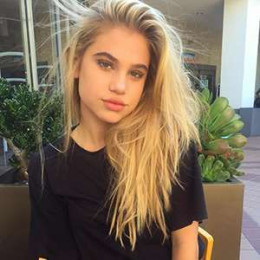 A famous model and social media personality, Meredith Mickelson is popular by her youtube channel called 'MickCheese'. She appeared on the cover of 'Vogue magazine' two times in 2016.

Mickelson is popular on Instagram and earned representation with New York Model Mgmt, Salt Models Atlanta, as well as Next Model Management Miami, and Freedom Los Angeles.She created her Twitter account since 2012.

Meredith Mickelson set up a YouTube channel with her friend Megan Donoho and named it 'Meg & Mer'. She has an older brother named Daniel, he first joined the social media world in September 2012 when he created his Twitter account.

Mickelson began dating Kian Lawley, an Internet sensation on Twitter, Vine, and YouTube as well as a member of the group known as 'Our 2nd Life'.The couple is together since 2016.